TRENDING
Andrew Ojok wins Omoro by-elections to replace his late father Jacob Oulanyah May 27, 2022
Raila To Appear Before Commission for Clearance May 25, 2022
Territorial Police Ordered to Protect Walking Pilgrims May 24, 2022
Court Orders For Fresh Elections In Soroti City East May 24, 2022
Monkeypox Virus Spreads Across the World, Experts Warn Of Further Rise In Cases May 23, 2022
Next
Prev
Facebook Twitter

Since Bobi Wine broke the news about the monster ride only a few pals of him new about it.

The NUP darling had remained tight lipped about his brand new wheels not until he chose to drop the bombshell via his official Facebook page.

In his post, he told the world how his caring fans had finally fulfilled their pledge of buying him an armored car to keep him safe as he executes the ‘Siturago Missions’.

“A few weeks ago, these comrades surprised me when they informed me that they had succeeded in raising enough money for the vehicle, and here it is. I can’t thank you enough,” he posted on Sunday morning

Many of the fans camped at his party offices in Kamwokya to catch a glimpse of the said bullet proof ride.

However Bobi  Wine hadn’t availed the details when and how the car reached at his home in Magere not until recently when security agencies started trailing to investigate the  matter and yesterday they tried to access then later’s home to access the ride apparently on orders of the IGG. 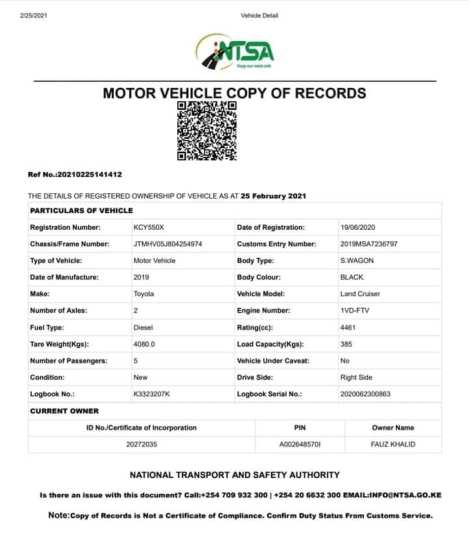 According to the documents, the car entered from Busia border post on 5th November, 2020, registered under license plate, KCY 550X Logbook number K3323207K in the names of  Fauz Khalid, a Kenyan national. The car was issued a C32 for temporary import.

Mean while on 8 Jan. 2021 Khalid through his agent, a one Sabiti Abel who is according to sources the Director of Real Time Global Cargo Handlers Uganda Ltd, requested a registration of the Bobi’s car using help tool Ref 210126637. Thereafter, they deposited it at the customs warehouse under cargo  on 11 Jan 2021.

After clearing a whooping UGX 88,612,027 taxes, the car was given to Fauza Khalid with a number plate UBJ 667F, who then applied to change it’s ownership to Robert Kyagulanyi!

Below are Bobi Wine car documents that have leaked online, leaving netizens murmuring and according to the docs, the car is not armored as it had been earlier suggested. 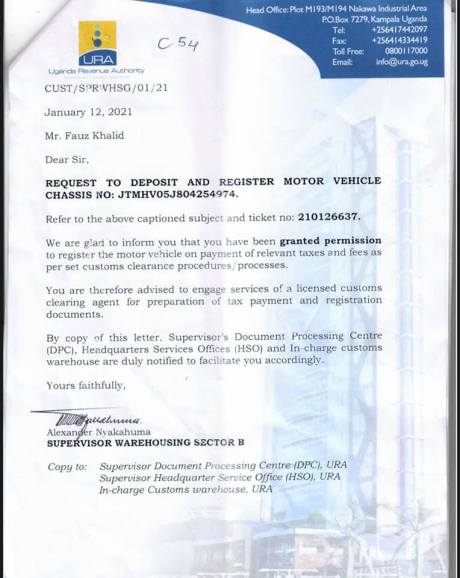 ePosta: Everyone In Uganda Can Now Have An e-Postal Address