The ruling party  National Resistance Movement (NRM) has announced  that it will not endorse any candidate to contest and carry  their flag for the position of Member of parliament for  Mawogola North constituency in Sembabule district ahead of 2021 General elections. This shocking revelation was announced  by NRM Secretary  general Hon Justine Kasule Lumumba in a letter that was released on Thursday October.

This comes shortly after NRM disqualified Soda Kaguta Aine’s victory citing some malpractices that were filed by his close rival Shartis Nayebare Kuteesa who is  the daughter to Minister Sam Kutesa.

In her statement, Kasule said that it’s not possible to summon CEC meeting and endorse the new flag bearer since the closure of nomination ends today.

”The Electoral Commission.of the National Resistance Movement declared Mr. Sodo Aine Kaguta as the winner of the primary elections, a decision which Ms. Mushererure Kutesa Nayebare Shartsi immediately challenged by petitioning to the elections dispute tribunal of the party, which was set up for that purpose”.

”The petition was heard on Thursday, 8 October, 2020. In its ruling dated 14 October, 2020, which I have received this afternoon, the elections dispute tribunal did not conclusively pronounce itself on the merits of the petition before it due to time constraints; and instead recommended the protagonists to the National Resistance Movement Central Executive Committee for directions”. reads the letter

Lumumba’s letter further reveals that It is not possible to summon the Central Executive Committee meeting to consider the reference made to it by the elections dispute tribunal as mentioned above mainly because time limitations, given that the day tor nominations for positions of Members of Parliament is tomorrow, 16 October, 2020.

”In the circumstances that CEC cannot conevene in the few hours left to the close of nominations timetable as set by the national electoral commission, I have therefore taken the considered decision that NRM will not endorse any Candidate to contest as its flag bearer for the position of Member of Parliament for Mawogola North Sembabule district.” reads the letter. 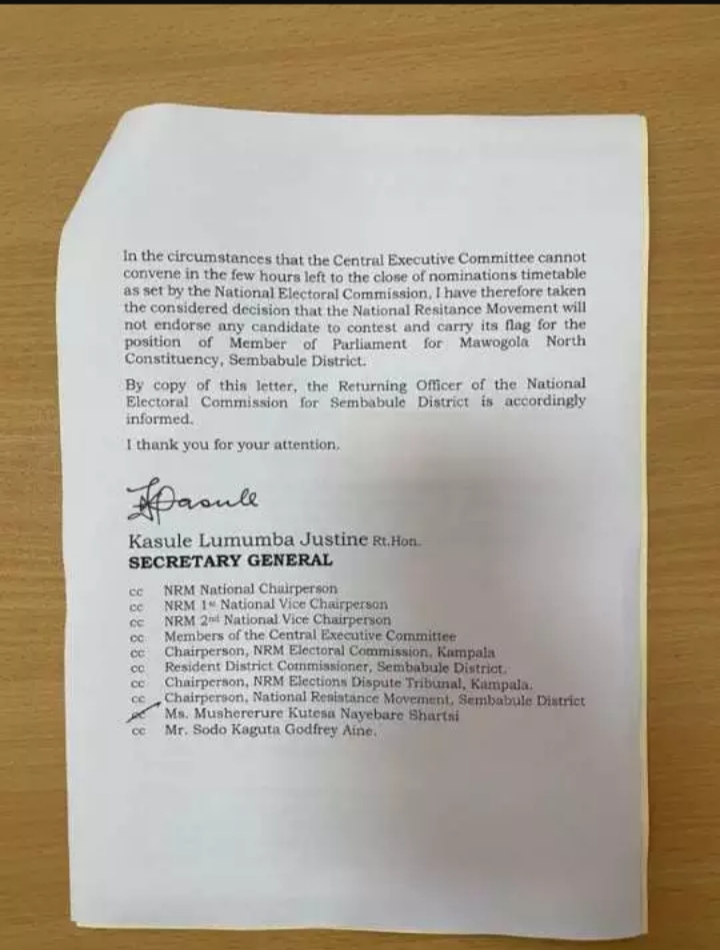 However  both Shartis Kuteesa and Soda Kaguta Aine  were all  nominated today to stand as independents to contest for the Mawogola north constituency in 2021 general elections.

Simple Ways To Guard Your Heart