The National Identification and Registration Authority (NIRA) has signed a memorandum of understanding with the Financial Intelligence Authority, giving the latter authority to access data on citizens’ national IDs as one of the ways to fight financial crimes including money laundering.

The NIRA director noted that the deal will help avoid duplication of resources and ensure efficiency.

According to the card readers provided, they have a system that reads all data contained on the national identity cards as well as a provision for thumbprints for verification.

Agatha Mutenyo, the director of finance and administration at NIRA said after several discussions between the two agencies, they decided to formalize the collaboration to enable each of the institutions execute its mandate. 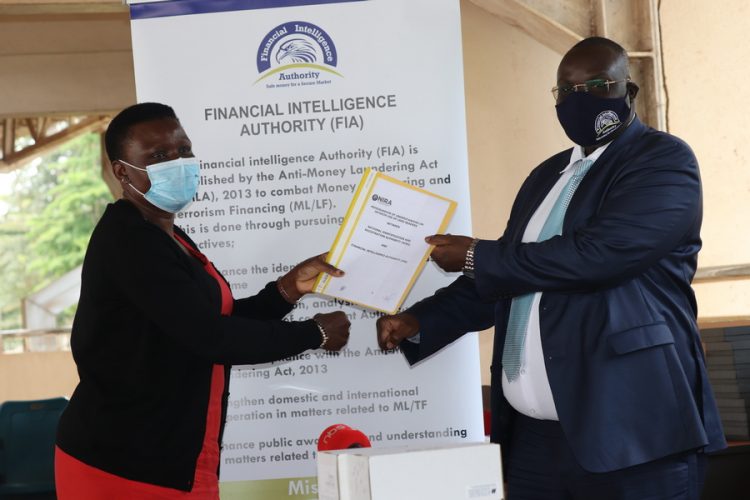 “The provision for access and use of the information on the register is keeping in line with the intention of government to set up a centralized register of citizens and legally resident aliens that would constitute the primary source of information on a person’s identities,” Mutenyo said.

She explained that as part of the deal, NIRA would hand over four electronic card readers to help the Financial Intelligence Authority verify information provided by people interacting with the body.

“It is agreed by both parties that real-time verification of national identification data received by FIA using card readers will enable the identification of all persons appearing before them, these machines will greatly help us in analyzing the information we get. It will help us get to know the identity of people behind suspicious transactions,” Sydney Asubo, the Financial Intelligence Authority Executive Director added.

“Identity goes beyond the name and date birth but also includes things like place of residence. Getting this information will greatly help us in fulfilling our mandate of fighting money laundering and terrorism financing.” he added

Asubo said even the foreign nationals will be easily identified through the directorate of Citizenship and Immigration Control of the Ministry of Internal Affairs.

How over 30 Ugandan girls stranded in Saudi Arabia were rescued

Learn From Experts: Why and How Hackers Managed To Steal Billions From MTN, Airtel And Stanbic Bank In Recent Cyber Attack

How over 30 Ugandan girls stranded in Saudi Arabia were rescued