Last week social media was awash with the news of housing finance bank employee in this case Ivan Kituka, the Senior Manager Branch Performance and Customer Experience at, Kololo branch was living  in fear for his life after a one Ssozi, threatened to end his life with bullets in the head accusing him of continuously and shamelessly bonking his wife’s sumbie even after giving him several warnings but all in vein.

In a press statement released on October 15, the management of housing Finance bank has come out to clarify and confirmed that the allegations and the employees are being investigated for the improper conduct and that the bank management is committed to support the due process of the law. ”Housing Finance Bank has noted with concern the recent social and print media publications regarding the alleged improper conduct of two of our employees.” reads the statement

Some social media reports indicated that one of the employees in question, Ivan Kituka was shot dead in video that was making rounds on social media however, housing finance has dismissed the allegations and assured the public that there is no loss of life as earlier reported in the news. 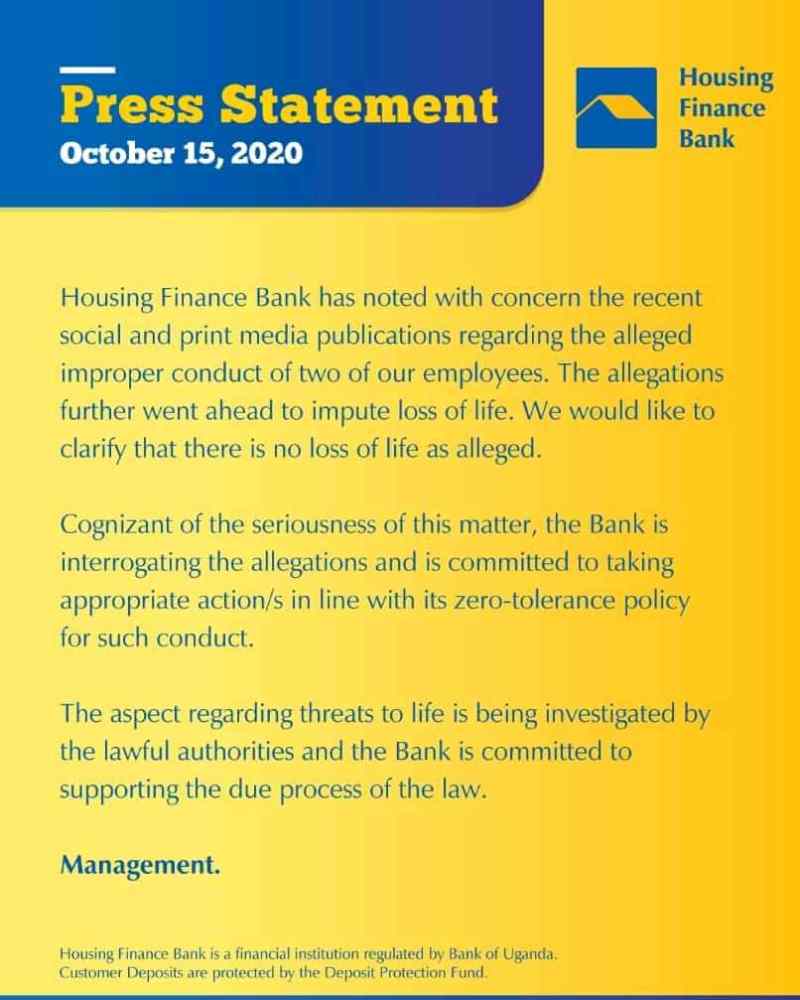 ”The allegations further went ahead to impute loss of life. We would like to clarify that there is no loss of life as alleged” reads the statement.

The statement further adds that Cognizant of the seriousness of this matter, the Bank is interrogating the allegations and is committed to taking appropriate action/s in line with its zero-tolerance policy for such conduct.

Housing Finance bank also confirmed that the aspect regarding threats to life that were made in the letter written by a one Mr.Ssozi  is being investigated by the lawful authorities and the Bank is committed to supporting the due process of the law.

Learn From Experts: Why and How Hackers Managed To Steal Billions From MTN, Airtel And Stanbic Bank In Recent Cyber Attack