The US president and the first lady have tested positive for Covid-19 after senior aide Hope Hicks was also found to have the virus. Trump reportedly spent substantial time in close proximity with Hicks this week.

US President Donald Trump and the First Lady tested positive for coronavirus Thursday. Trump tweeted that he and his wife Melania would begin their “recovery process immediately” and “get through this together.” The president becomes the highest-profile world leader to contract the virus, just a month before he seeks a second term in the White House.

The Trumps had entered quarantine earlier in the day after senior aide Hope Hicks had also tested positive. She spent a substantial amount of time in close proximity with Trump this week, including travelling with him to a campaign rally on Wednesday, the Associated Press reported, citing an administration official. 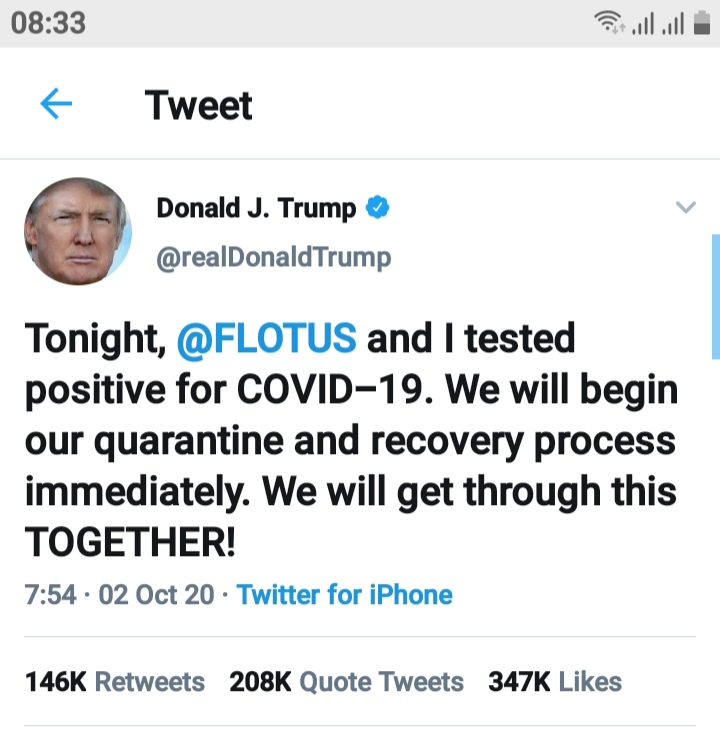 She also travelled with Trump several other days this week, including onboard the presidential helicopter Marine One as well as on Air Force One.

At 74, Trump is at higher risk of developing severe complications from Covid-19.

After several earlier positive cases close to the president, the White House began conducting daily tests for Trump’s senior aides and anyone else in close proximity with the president or vice president Mike Pence — including reporters.

“The President takes the health and safety of himself and everyone who works in support of him and the American people very seriously,” White House spokesperson Judd Deere said.

The virus has claimed over 200,000 lives in the US making it the world’s highest death toll. Over 7.2 million people in the US have been infected with the virus so far.

Trump has been criticized for his response to the pandemic, including playing down the threat and refusing to abide by public health guidelines — including wearing masks.